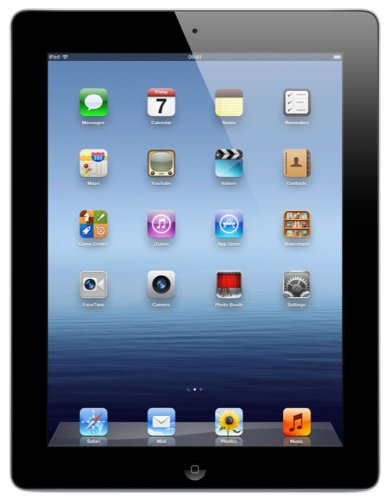 Whilst the iPhone may have drifted from market leader in terms of technology and innovation, due to its firm grip on the tablet market the iPad is still the greatest tablet money can buy. Although Android tablets are gaining a good foothold in the market, the near three years of lead the iPad had means it is by far the biggest pull for developers. This huge range of iPad specific apps, combined with a superbly smooth experience and THAT amazing screen means the new iPad or iPad 3 as most people say, is still he tablet to have if you have the money. The good news is, with the imminent appearance of the iPad Mini (or whatever it may be called) we are starting to see some deals of the base model.

Chomping Turtle recommends you get the cheapest 16GB iPad or the 16GB 3G if you need it. The larger capacities are just not worth the money. 16GB is more than enough to have tons of apps and games. Our favourite feature of the iPad… Newstand magazines. The retina display enhanced travel magazines look superb. And companies like Top Gear magazine and Stuff do some superb interactive issues. This definitely is the future for magazine reading. As mentioned before, the screen is out of this world. If only you could get a 10 or 11.6 inch laptop with a resolution this high for £400. Plus being the latest iPad it is nice to know everything just works that you can download from the app store.

Yes there are a few flaws, I think it is slightly too big, and the Apple Ecosystem is very limited in customisation, but for a true tablet experience the latest iPad is incredible, which is a lot more than can be said for the latest iPhone 5 . Just dont use it as a camera at a gig. That is really annoying.